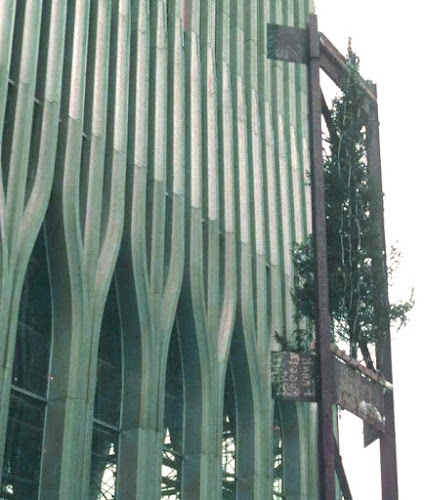 A construction web page linked an interesting article about the origins of traditional "topping out" ceremonies from a 2013 issue of Slate magazine (also the source of the photo).  Having witnessed the placement of trees and other secular and religious symbols on the top of buildings in at least two different countries, I was fascinated by the universal similarity of the tradition that seems to have sprung up spontaneously from a number of different sources and has remained, according to the article, almost unchanged into our modern era.

According to the article, "the purpose of the ceremony—at least for shining skyscrapers—is usually couched in comfortably post-pagan terms: a celebration of a so-far safe construction site, an expression of hope for the secure completion of the structure, and a kind of secular blessing for the building and its future inhabitants."

The article includes a number of photos from the topping out ceremony during the construction of the World Trade Center towers in New York City.  Seeing these photos today was a sobering reminder of the events of 19 years ago and the hope embodied in the topping out ceremony that was lost that day.  It's worth sharing today to remember those who perished and to extend anew the hope that we can, through traditions like these, find a way to come together as a human civilization and avoid such tragedies in the future.